Winner of the Pulitzer Prize and the National Book Award, this #1 New York Times bestseller chronicles a young slave's adventures as she makes a desperate bid for freedom in the antebellum South Cora is a slave on a cotton plantation in Georgia. An outcast even among her fellow Africans, she is on the cusp of womanhood—where greater pain awaits. And so when Caesar, a slave who has recently arrived from Virginia, urges her to join him on the Underground Railroad, she seizes the opportunity and escapes with him. In Colson Whitehead's ingenious conception, the Underground Railroad is no mere metaphor: engineers and conductors operate a secret network of actual tracks and tunnels beneath the Southern soil. Cora embarks on a harrowing flight from one state to the next, encountering, like Gulliver, strange yet familiar iterations of her own world at each stop. As Whitehead brilliantly re-creates the terrors of the antebellum era, he weaves in the saga of our nation, from the brutal abduction of Africans to the unfulfilled promises of the present day. The Underground Railroad is both the gripping tale of one woman's will to escape the horrors of bondage—and a powerful meditation on the history we all share. Look for Colson Whitehead’s new novel, Harlem Shuffle, coming this September!

NOW A MAJOR TV SERIES BY BARRY JENKINS (COMING MAY 2021) WINNER OF THE PULITZER PRIZE FOR FICTION 2017 WINNER OF THE ARTHUR C. CLARKE AWARD 2017 LONGLISTED FOR THE BOOKER PRIZE 2017 NATIONAL BOOK AWARD WINNER 2016 'Whitehead is on a roll: the reviews have been sublime' Guardian 'Luminous, furious, wildly inventive' Observer 'Hands down one of the best, if not the best, book I've read this year' Stylist 'Dazzling' New York Review of Books Praised by Barack Obama and an Oprah Book Club Pick, The Underground Railroad by Colson Whitehead won the National Book Award 2016 and the Pulitzer Prize for Fiction 2017. Cora is a slave on a cotton plantation in Georgia. All the slaves lead a hellish existence, but Cora has it worse than most; she is an outcast even among her fellow Africans and she is approaching womanhood, where it is clear even greater pain awaits. When Caesar, a slave recently arrived from Virginia, tells her about the Underground Railroad, they take the perilous decision to escape to the North. In Whitehead's razor-sharp imagining of the antebellum South, the Underground Railroad has assumed a physical form: a dilapidated box car pulled along subterranean tracks by a steam locomotive, picking up fugitives wherever it can. Cora and Caesar's first stop is South Carolina, in a city that initially seems like a haven. But its placid surface masks an infernal scheme designed for its unknowing black inhabitants. And even worse: Ridgeway, the relentless slave catcher sent to find Cora, is close on their heels. Forced to flee again, Cora embarks on a harrowing flight, state by state, seeking true freedom. At each stop on her journey, Cora encounters a different world. As Whitehead brilliantly recreates the unique terrors for black people in the pre-Civil War era, his narrative seamlessly weaves the saga of America, from the brutal importation of Africans to the unfulfilled promises of the present day. The Underground Railroad is at once the story of one woman's ferocious will to escape the horrors of bondage and a shatteringly powerful meditation on history. 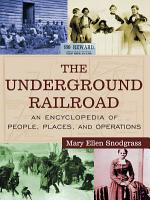 The culmination of years of research in dozens of archives and libraries, this fascinating encyclopedia provides an unprecedented look at the network known as the Underground Railroad - that mysterious "system" of individuals and organizations that helped slaves escape the American South to freedom during the years before the Civil War. In operation as early as the 1500s and reaching its peak with the abolitionist movement of the antebellum period, the Underground Railroad saved countless lives and helped alter the course of American history. This is the most complete reference on the Underground Railroad ever published. It includes full coverage of the Railroad in both the United States and Canada, which was the ultimate destination of many of the escaping slaves. "The Underground Railroad: An Encyclopedia of People, Places, and Operations" explores the people, places, writings, laws, and organizations that made this network possible. More than 1,500 entries detail the families and personalities involved in the operation, and sidebars extract primary source materials for longer entries. This encyclopedia features extensive supporting materials, including maps with actual Underground Railroad escape routes, photos, a chronology, genealogies of those involved in the operation, a listing of Underground Railroad operatives by state or Canadian province, a "passenger" list of escaping slaves, and primary and secondary source bibliographies. 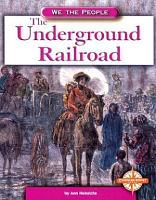 Describes the underground railroad which helped slaves escape to freedom. 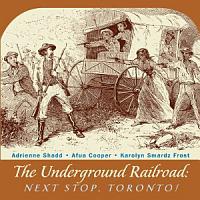 "The Underground Railroad: Next Stop, Toronto! stands out as an engaging and highly readable account of the lives of Black people in Toronto in the 1800s. Adrienne Shadd, Afua Cooper and Karolyn Smardz Frost offer many helpful points of entry for readers learning for the first time about Black history in Canada. They also give surprising and detailed information to enrich the understanding of people already passionate about this neglected aspect of our own past." - Lawrence Hill, Writer The Underground Railroad: Next Stop, Toronto!, a richly illustrated book, examines the urban connection of the clandestine system of secret routes, safe houses and "conductors." Not only does it trace the story of the Underground Railroad itself and how people courageously made the trip north to Canada and freedom, but it also explores what happened to them after they arrived. And it does so using never-before-published information on the African-Canadian community of Toronto. Based entirely on new research carried out for the experiential theatre show "The Underground Railroad: Next Stop, Freedom!" at the Royal Ontario Museum, this volume offers new insights into the rich heritage of the Black people who made Toronto their home before the Civil War. It portrays life in the city during the nineteenth century in considerable detail. This exciting new book will be of interest to readers young and old who want to learn more about this unexplored chapter in Toronto's history.

Enjoy learning the vast history of the Underground Railroad through many different eyes in this book by William Still, the black abolitionist who is often called the "Father of the Underground Railroad" for his remarkable role in organizing its operation, as well as the multitude of people he helped to find freedom. Discover the many individual stories of the journey to freedom in this remarkable book.

This volume contains a multitude of wonderful stories that weave together a picture of life in the South in the 1800s and the fear and courage of those that participated in helping thousands of people escape slavery. The work also includes chapters on the politics of the time, and the oft-times contradictory laws that were passed. 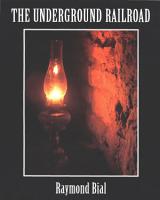 By ones, twos, and threes, in the years before the Civil War thousands of enslaved people slipped through the night on their way to freedom, riding the Underground Railroad. Hidden and hunted, the escape of southern slaves to the North remains a compelling event in American history. Within the pages of this book are documented, in prose and elegantly articulate photographs, examples of "stations" on the Railroad, along with images of the routes, lives, and hardships of both the "passengers" and "conductors."