The Count of Monte Cristo (French: Le Comte de Monte-Cristo) is an adventure novel by French author Alexandre Dumas completed in 1844. It is one of the author's most popular works, along with The Three Musketeers. Like many of his novels, it is expanded from plot outlines suggested by his collaborating ghostwriter Auguste Maquet.The story takes place in France, Italy, and islands in the Mediterranean during the historical events of 1815-1839: the era of the Bourbon Restoration through the reign of Louis-Philippe of France. It begins just before the Hundred Days period (when Napoleon returned to power after his exile). The historical setting is a fundamental element of the book, an adventure story primarily concerned with themes of hope, justice, vengeance, mercy, and forgiveness. It centres around a man who is wrongfully imprisoned, escapes from jail, acquires a fortune, and sets about getting revenge on those responsible for his imprisonment. However, his plans have devastating consequences for the innocent as well as the guilty. In addition, it is a story that involves romance, loyalty, betrayal, and selfishness, shown throughout the story as characters slowly reveal their true inner nature.The book is considered a literary classic today. According to Luc Sante, "The Count of Monte Cristo has become a fixture of Western civilization's literature, as inescapable and immediately identifiable as Mickey Mouse, Noah's flood, and the story of Little Red Riding Hood.

The Count of Monte Cristo (French: Le Comte de Monte-Cristo) is an adventure novel by Alexandre Dumas, père. It is often considered, along with The Three Musketeers, as Dumas' most popular work. It is also among the highest selling books of all time. The writing of the work was completed in 1844. Like many of his novels, it is expanded from the plot outlines suggested by his collaborating ghostwriter Auguste Maquet.The story takes place in France, Italy, islands in the Mediterranean and the Levant during the historical events of 1815-1838 (from just before the Hundred Days through the reign of Louis-Philippe of France). The historical setting is a fundamental element of the book. It is primarily concerned with themes of hope, justice, vengeance, mercy, forgiveness and death, and is told in the style of an adventure story.This books includes only short summary of every chapterIf you've read the book already but it's been awhile, a summary can refresh your memory so you can recall the key points without re-reading the whole thing. It really saves a ton of time and if you value time thrn boy oh boy we do have a product for you(: 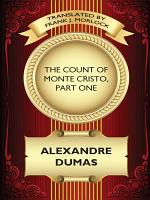 This dramatization of the classic novel is the first of four parts. In 1815 Napoleon has fled to Elba, and the Bourbons have been restored to the French throne. Young Edmond Dantes is First Mate and Acting Capt. of the merchant ship Pharoah. Everything seems bright for his future, until he's arrested for delivering a letter to Elba--a dying request of his former captain. Then three men conspire to send the innocent youth to the notorious island prison, the Chateau d'If. There Dantes meets the Abbe Faria, who gives him an education, and tells him of a fabulous treasure he's discovered. But Faria suddenly dies, and Edmond must take advantage of the sudden opportunity, or risk being imprisoned for life. He sews himself into the Abbe's burial shroud. Can he survive the plunge into the sea? An absolutely riveting drama.

On the day of his wedding, Edmond Dantès is falsely accused of treason, arrested, and imprisoned without trial. A fellow prisoner inspires Dantès to escape and guides him to a fortune in treasure.

Some days after this meeting- Albert de Morcerf visited the Count of Monte Cristo at his house in the Champs Elysees- which had already assumed that palace-like appearance which the count's princely fortune enabled him to give even to his most temporary residences.' (Excerpt from Chapter 54)

The Count of Monte Cristo, by Alexandre Dumas, was an instant success when it was first serialised in 1844-45. It tells the story of Edmond Dantes, an innocent man wrongfully imprisoned. On his escape, Dantes inherits a vast hoard of treasure on the Island of Monte Cristo, and uses his fortune to seek revenge on those who plotted his downfall.This title is part of a wonderful new series that offers a quick way into a range of exciting stories. Fast-moving and accessible, each story is a shortened, dramatically illustrated version of the classic novel, which loses none of the strength and flavour of the original. Retold rather than abridged.

Edmond Dantes thinks life is grand until he is arrested and imprisoned for a crime he did not commit. Upon his ill-gotten freedom, armed with the map to find a vast and endless treasure, Edmond embarks on an adventure to redeem his honor and seek vengeance for the long years he suffered locked away in prison. French men and sensuality go hand in hand, and although Edmond has been out of the game of love for sometime, he learns how to get exactly what he wants, and who. Betrayal, lust, rage, and hope all run along the same emotional vein and Edmond learns how to twist people’s emotions toward exactly what he needs to gain his redemption. Sensuality Level: Sensual

Edmond Dantes, a nineteen-year-old sailor from Marseilles, is soon to be captain of his own ship and to marry his beloved, the beautiful Mercedes. But spiteful enemies provoke his arrest on his wedding day, and he is condemned to life in prison. His sole companion is the 'crazy' priest Faria, who shares with Edmond a secret escape plan, and a map to hidden riches on the island of Monte Cristo. When Faria dies, Edmond attempts the incredible escape alone. finally he is free and rich beyond imagination after 14 years in prison. Keeping his true identity a secret, he enters society as Count of Monte Cristo, a polite, refined nobleman determined to reclaim his lost love, and to avenge his accusers. This is a story of suspense, intrigue, love and the triumph of good over evil. Includes unique illustration.