This is a pre-1923 historical reproduction that was curated for quality. Quality assurance was conducted on each of these books in an attempt to remove books with imperfections introduced by the digitization process. Though we have made best efforts - the books may have occasional errors that do not impede the reading experience. We believe this work is culturally important and have elected to bring the book back into print as part of our continuing commitment to the preservation of printed works worldwide.

A biography of the fifteenth-century Italian political and military figure described by Machiavelli in "The Prince." 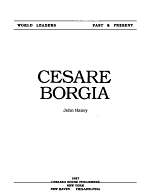 A biography of the fifteenth-century Italian political and military figure described by Machiavelli in "The Prince."

Almost five centuries have passed since Cesare Borgia's death, yet his reputation still casts a sinister shadow. He stands accused of treachery, cruelty, rape, incest and, especially, murder - assassination by poison, the deadly white powder concealed in the jewelled ring, or by the midnight band of bravos lurking in the alleys of Renaissance Rome. Yet the real Cesare Borgia was a fascinating figure in the mould of the great Shakespearean hero. During the brief space of time in which he occupied the stage he shocked and stunned his contemporaries by the loftiness of his ambitions, the boldness and daring of their execution. His rise to fame was meteoric. Born the illegitimate son of a Spanish Cardinal who became Pope Alexander VI, he was, by his 27th year, the most hated, feared and envied man of his day, flattered and courted by the rulers of France, Spain and the Empire, admired by Machiavelli who immortalised him in The Prince. At 31 he was dead, having failed to achieve his ambition of a great Italian State. In Sarah Bradford's brilliant biography, Cesare's life and struggles assume the proportion of Greek tragedy.